Its All about Pj Problem Strings - 7 Spaces Of Interest and their associated Basic Sequences; 7 Pj Problems of Interest (PPI) and their Alleles (A) 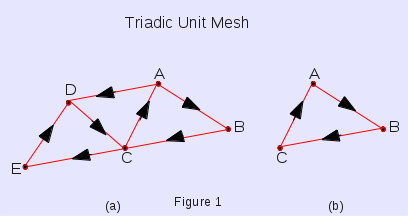 The Triadic Unit Mesh (TUM) is shown in figure 1a. The Problem Genome (a mesh of infinitely many PjProblemStrings) is a composite of triadic unit meshes. In other words, the infinitely many PjProblemStrings that constitute the Problem Genome are grouped as triadic unit meshes. TUM is a trapezoid consisting of three triangles (triangles ABC, ACD and DCE). Hence it is triadic. The sides of the triangles are PjProblemStrings. The vertices of the triangles are particular Pj Problems (usually P3) that connect two or more PjProblemStrings. TUM presents the conceptual framework of the PjProblemStrings needed for the construction of an entity. Triangle ABC represents the part of the framework that addresses the identification of the fundamental elements needed for the construction, the formation of the building unit from the fundamental elements and the start of any other additional compound-grouping of the building units. Triangle ACD represents the part of the framework that addresses additional compound-grouping of the building units. Triangle DCE represents the part of the framework that addresses the being and survival of the entity. TUM reduces to the single triangle (figure 1b) in the case where no compound-groupings of the building units exists. Sides AC and DC are interfaces. The Problem Arrow is restricted to its triangle. In other words, the arrow of side CE of triangle DCE is not a continuation of the arrow of side BC of triangle ABC. 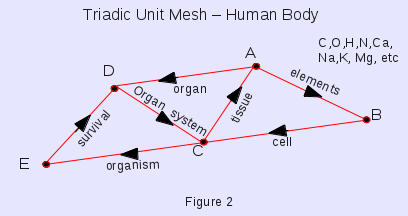 Figure 2 is an example of how the triadic unit mesh has been used to present a conceptual framework for the human body (perhaps the most complex construction ever built). There are PjProblemStrings associated with each of the named sides of the triangles and PjProblems associated with the vertices. The presentation of these strings and numerous other PjProblemStrings in the context of the construction of multi-matter multi-dynamic entities, is the primary mission of the Problem Genome Market. In the case of unicellular organisms such as the bacteria, the triadic unit mesh reduces to triangle ABC with the adjustment of sides AB and AC. In fact side AC is replaced by side DE survival