Sign in
Login
More Laws Are Vain Where Less Will Serve. Robert Hooke 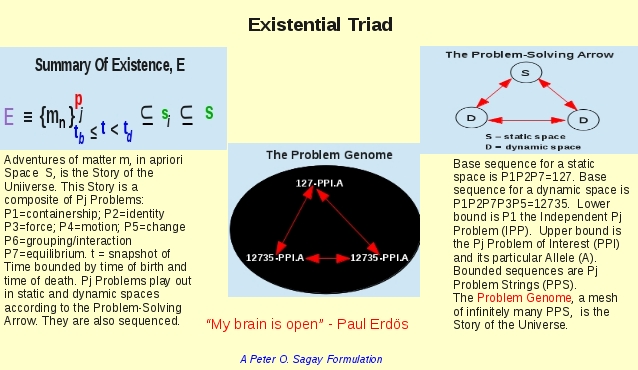 (1) The Summary of Existence: a mathematical identity which presents existence as a totality of matter's ({m}n) adventures in its myriad residences (si) in a universal apriori Space Continuum, S

These adventures are expressed in various snapshots of time t within the boundaries of the time of birth (tb) and the time of death (td), as 7 types of existential problems called Pj problems: containership, identity, force, motion, change, grouping/interaction and equilibrium. In essence, all problems nature poses to humans are Pj Problems.

Most existential problems are composites of Pj Problems. In such scenarios, there are Dependent Pj Problems (DPP) and Independent Pj Problems (IPP). The problem for which solution is sought is the Pj Problem of Interest (PPI). For example, consider a pot of water that is placed on a stove. Initially, the pj problem associated with this scenario are: contanership (volume of pot); identity (what is in the pot); equilibrium (is pot stable on stove?). More pj problems will come into play when the stove starts heating the water. For example, when the water in the pot begins to boil, the pj problems of motion and force due to the kinetic energy of the atoms of the water come into play. So does the pj problem of change due to the decrease in volume of the boiling water. All pj problems in this scenario except the containership problem are dependent pj problems. The Pj Problem of Interest (PPI) is the problem for which solution is sought. For example, the problem of interest (PPI) may be to determine the change in volume of the water after it has boiled for some time t. Every Pj Problem has at least one allele which is a variation of the Pj Problem.